A sympathetic-sounding but firm "no" to the tobacco companies' Quebec victims.

Yesterday the almost-routine process of extending the litigation stay which has prevented Quebec smokers from receiving their court-ordered compensation was interrupted by a request by their lawyers to prepone the next occasion for extension by 10 weeks.

During the hearing, in both tone and words, Justice Thomas McEwan expressed some empathy for the frustration felt by those individuals who have suffered with cancer and lung disease and have been waiting since 2015 to receive the compensation ordered by that province's court.

He said he would think overnight before making his decision on their request for extending the stay to January 15th instead of March 30. True to his word, about 24 hours later his decision was communicated on the web-site of one of the Monitors.

His answer was NO.  "I have, somewhat reluctantly, come to the conclusion that the six month stay period proposed by the [tobacco company] Applicants is preferrable to the three month period proposed by QCAP [the Quebec class action]."

He explained his reflected a concern that anything shorter would be a distraction from the mediation discussions. He repeated the call he made yesterday for "all parties to the mediation to remain completely focused on resolution" and to provide "their full cooperation over the next six months".

Barring a breakthrough towards a settlement, it is now likely that discussions on the future of Canada's tobacco business will remain completely behind closed doors for another 6 months. Justice McEwan's ruling today included a reference to the confidential advice he considers when making his ruilings. It would appear that the Agenda for the meerting prepared by the Monitor's was annotated with a list of positions by stakeholders who chose to remain quiet during the public part of yesterday's hearing. ("The applicant's position is supported by the Monitors and a number of stakeholders noted in the Agenda.") 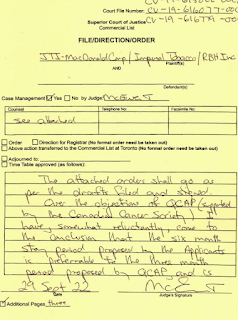 Posted by Cynthia Callard at 16:21

This blog is authored by: